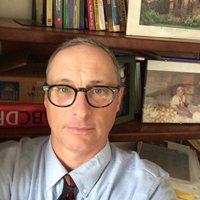 Robert Courtney Smith (Ph.D. Columbia, 1995) is a Professor of Sociology, Immigration Studies and Public Affairs at the School of Public Affairs, and in the Sociology Department, Graduate Center, CUNY.  His first book, Mexican New York: Transnational Worlds of New Immigrants (2006, University of California Press), won the American Sociological Association’s 2008 overall Distinguished Book Award, and three other sectional prizes (for immigration; community and urban sociology; and Latino/a sociology) and a Presidential prize from CUNY. This book drew on 18 years of ethnographic research, working extensively with undocumented people. His second book, Horatio Alger Lives in Brooklyn, But Check His Papers (California, forthcoming) examines the puzzle of why most Mexicans in New York are at least modestly upwardly mobile, but also shows how having, gaining or lacking legal status disrupts this otherwise positive integration. He is at work on a third book (with Andy Beveridge) This Is Still America! Contested Political Integration in Port Chester, based on work as an expert on a voting rights trial for the US Department of Justice in US. v Village of Port Chester, which resulted in the first ever cumulative voting scheme in New York. A fourth book (with the Seguro Popular Research Team), Mexicans in the US and the Seguro Popular Healthcare Program: How Diasporic Bureaucracies Should Communicate with Migrants is  under contract with Palgrave, Pivot Series. His work has been funded by the National Science Foundation, the SSRC, the Spencer Foundation, the W.T. Grant Foundation, the Guggenheim Foundation, and others.

Prof. Smith has combined public and intellectual work.  He is the founding Lead Faculty for the School of Public Affairs Mexican Consulate Leadership Program (since 2007).  He is also a cofounder and now Board Chair of Masa (masany.org), a fifteen year old nonprofit in New York promoting educational achievement and committed leadership with Mexican immigrants and their children.  He was named 2008 Youth Advocate of the Year by Association Tepeyac (then the largest Mexican oriented nonprofit in New York) and was cited with Masa and Executive Director Aracelis Lucero by the City Council in 2014 for Masa’s work in the Mexican community.  Smith is the Coordinator and Lead on the DACA Access Project, a new $1.8 million service evaluation and research project that will legalize at least 1000 new people via DACA (Deferred Action for Childhood Arrivals) and DAPA (Deferred Action for Parents of US citizen children) in 2015, and establish a ten year project studying the long term effects of having, gaining or lacking legal status.