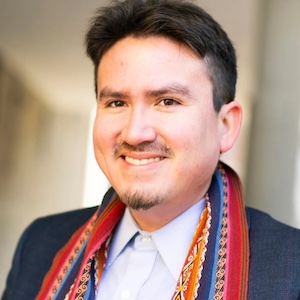 Américo Mendoza-Mori is an interdisciplinary scholar trained in literary, linguistic and cultural studies. At Harvard’s Committee on Ethnicity, Migration, Rights (EMR) he researches and teaches courses on Latinx and Indigenous communities.

Mendoza-Mori’s work has appeared in a variety of academic journals, has been presented at the United Nations, and has been featured in The New York Times, a TEDx talk, BBC, NPR, Remezcla. Previously, Dr. Mendoza-Mori acted as the founding coordinator of the University of Pennsylvania’s Quechua program, co-founder of The Quechua Alliance, and co-founder of the Thinking Andean Studies international conference. Additionally, he has been involved in educational, community-based initiatives and Indigenous language reclamation projects in Peru, Ecuador, Bolivia and the United States.

At Harvard he is the Faculty Director of the Latinx Studies Working Group and has recently launched the Quechua Initiative on Global Indigeneity.